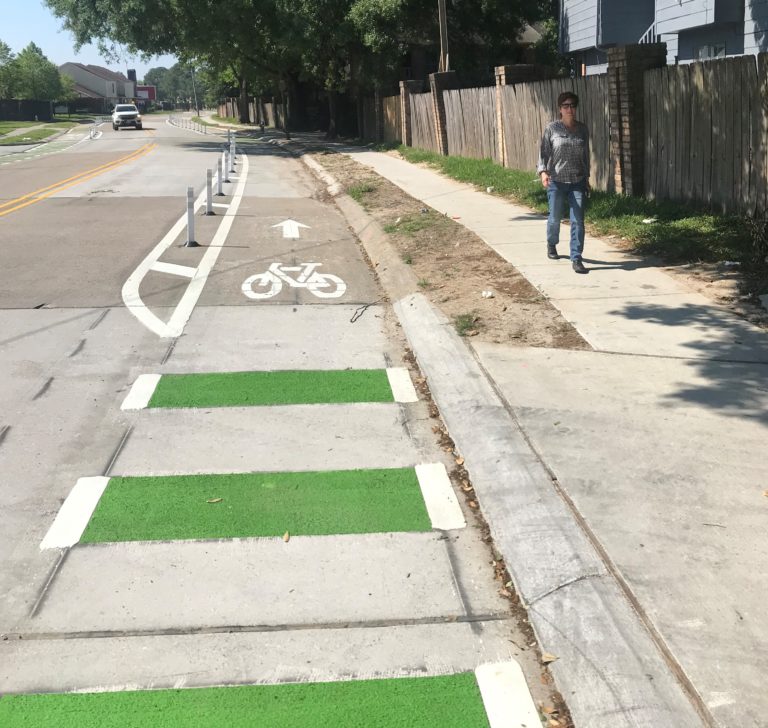 During this first year of construction, the City of New Orleans has committed to building out the first 75 miles of improvements including protected bike lanes, bike/walk boulevards, high-visibility crosswalks, improved bus stops and bus islands, refurbished and brand new sidewalks, and more. These first 75 miles will be focused in Algiers and neighborhoods directly adjacent to downtown New Orleans.

The improvements which comprise Moving New Orleans Bikes will ensure everyone — people walking, biking, driving, or riding public transit — have safe access to their fair share of the road. Central to the goals described in the Moving New Orleans vision is a city where all residents can safely, easily, and affordably commute to work, visit friends, exercise, go to the store, or access healthcare and do so no matter how they move from point A to point B. 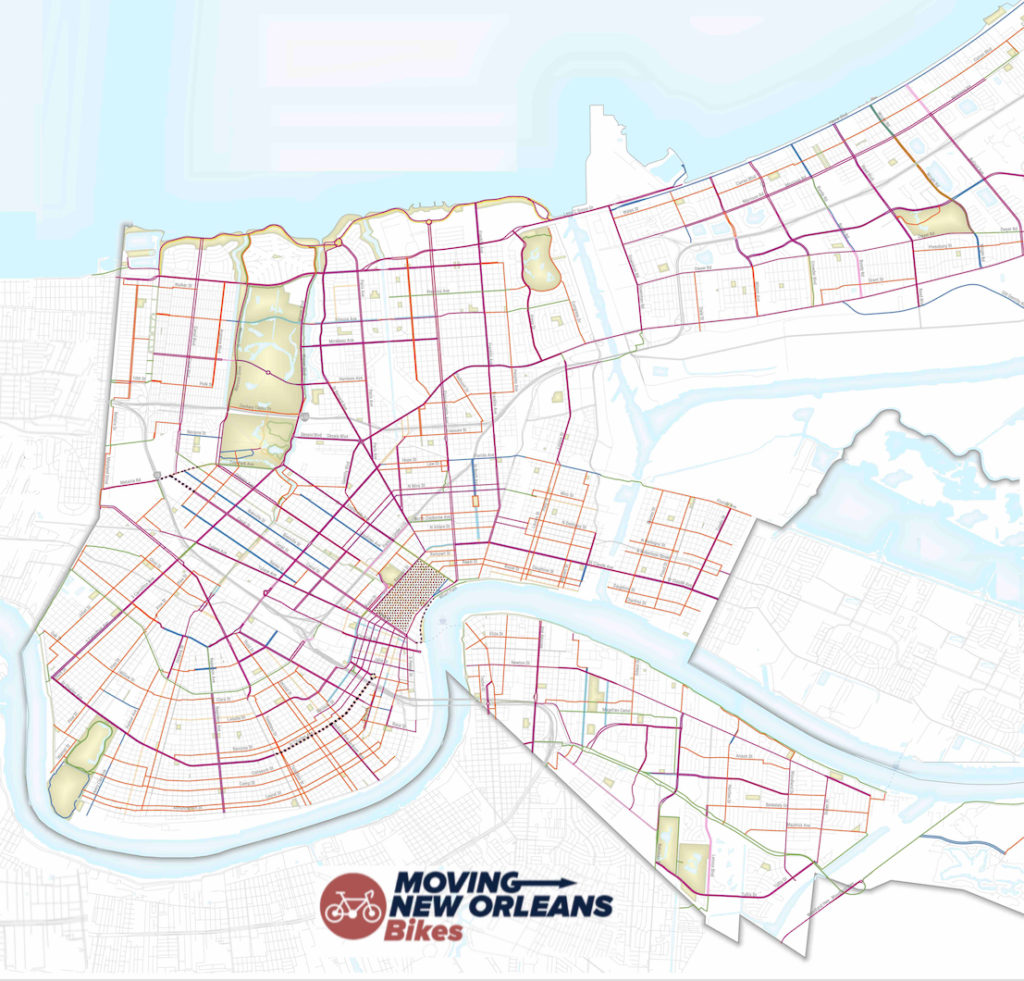 Algiers is receiving the first 11 miles of low-stress bikeways along 11 corridors.

These corridors will connect residents to local businesses, grocery stores, schools, as well as biking and nature trails.

Construction is expected to be finished in the fall of 2020.

As these Complete Streets are built, people are already activating them. From planting trees along Newton Street, to family bike rides across Algiers, you can learn more about them on our Complete Streets Activation Mini Grant page.

To engage and inform the Algiers community, as well as gain feedback on the their plans for improving street safety, the City of New Orleans held public meetings on improvements coming to Upper and Lower Algiers.

The presentations contain detailed descriptions and diagrams of how the City if bringing more safety and less stress to streets in Algiers.

As part of the Moving New Orleans Bikes Plan, 1.72 miles of streets in the Marigny and edge of the French Quarter are receiving safety infrastructure improvements, including protected bike lanes, extended curbs, improved crosswalks, repaved streets, and more. 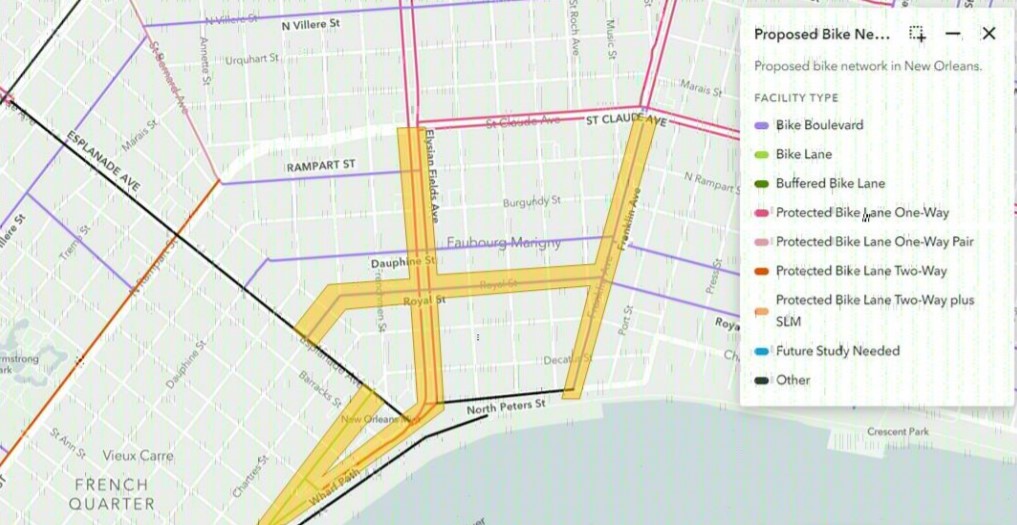 These improvements are being implemented along 5 corridors: Franklin Avenue, Royal Street, Elysian Fields Avenue, Decatur Street, and N. Peters Street. The City of New Orleans has already presented design plans, received and implemented feedback from the community, and is finishing construction. You can see photos below. 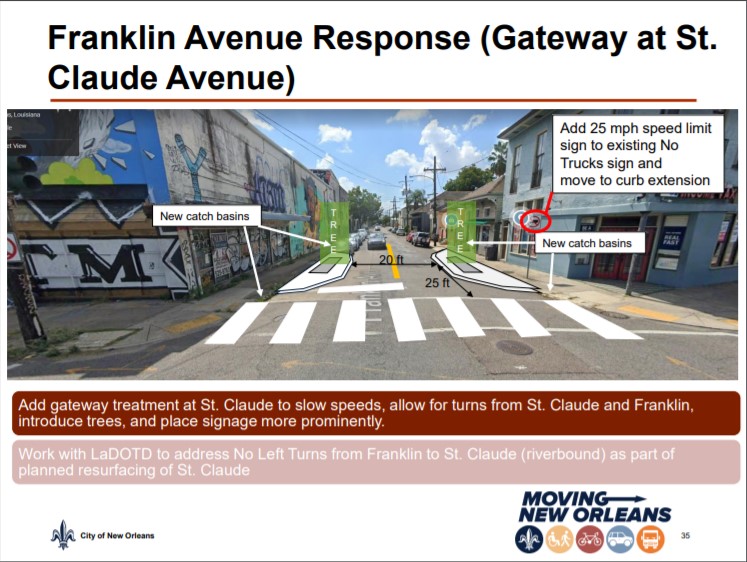 Over the Summer of 2020, the City of New Orleans held public, virtual meetings to present and receive feedback on their plans for street safety improvements in the Marigny and edge of the French Quarter.

At the meetings, City officials listened to and incorporated community input into their plans. For example, the diagram to the right shows an added gateway to Franklin Ave. that came after community members asked for traffic calming measures on this street.

You can learn more about how the City of New Orleans conducted their community engagement process by reading our blog post here.

Click here to view the presentation from the City of New Orleans’ later pre-construction meeting for improvements coming to the Marigny and edge of the French Quarter.

Central City and parts of the Lower Garden District will receive 2.78 miles as part of the Moving New Orleans Bikes plan. These improvements range from parking protected bike lanes, to road repaving, green infrastructure and more. 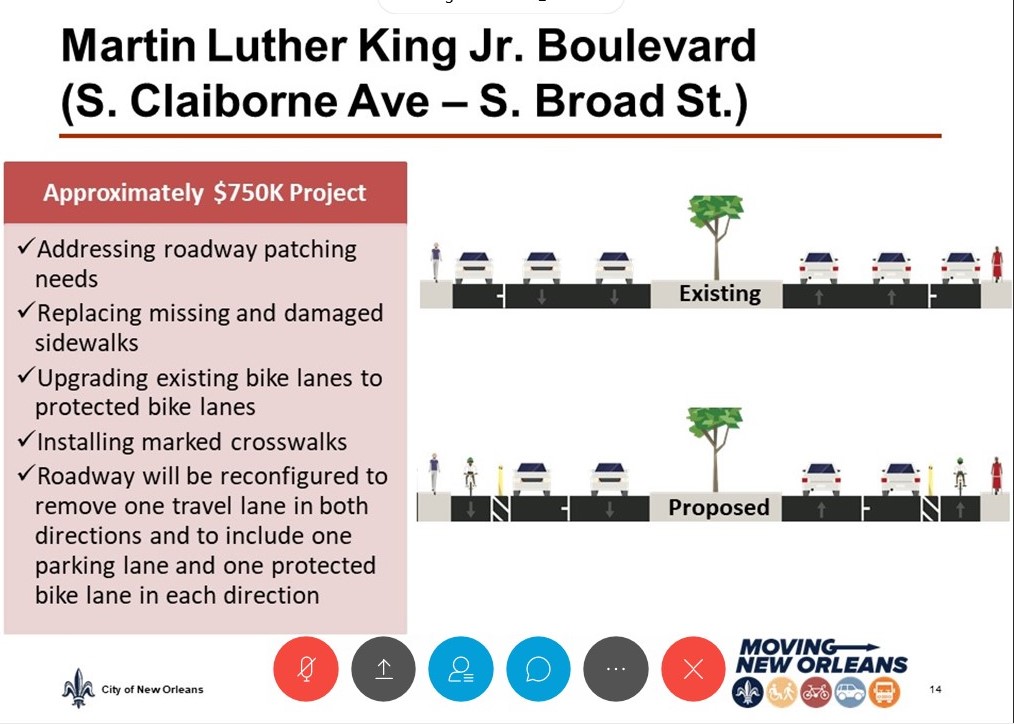 The City of New Orleans held a public pre-construction meeting on street safety improvements coming to Central City in July. At the meeting, officials from the City presented information about the current conditions of the area’s streets, and their plans to bring more safety and less stress to Central City’s streets. They also answered questions from the community and received feedback on their plans. We expect them to hold another public design meeting and address the community’s feedback soon.

Click here to view the presentation from the City of New Orleans’ conceptual design meeting on street safety improvements coming to Central City.

The Central Business District is a main thoroughfare for many New Orleans Residents. The City has plans to build protected bike lanes throughout the area, ensuring people can safely commute through the area, all the way to and from Canal Street.

The City of New Orleans is initially focusing on a 1.8 mile corridor in the Central Business District comprising of Baronne Street, O’Keefe Avenue, and Julia Street.

We know from experience that a few, loud voices will push back against these changes. That’s why we’re asking people to tell City officials that we support Complete Streets in the CBD. Sign our petition by clicking here today.

The officials presented their plans and the community offered feedback on their proposals. More community meetings are expected in the coming months. 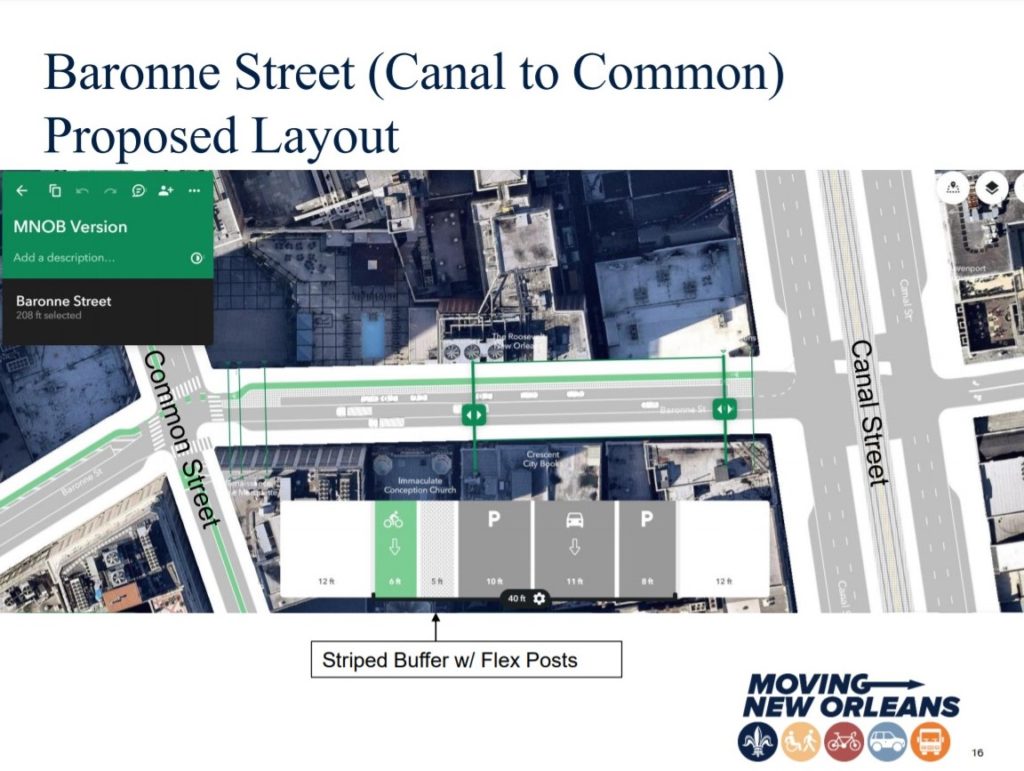 Read more about the City’s proposed plans and what they mean for more safety and less stress on New Orleans streets by reading our blog post about them here.

You can view the slides from the presentation and review the proposed designs by clicking here.

Here are the streets that were discussed in the meeting: 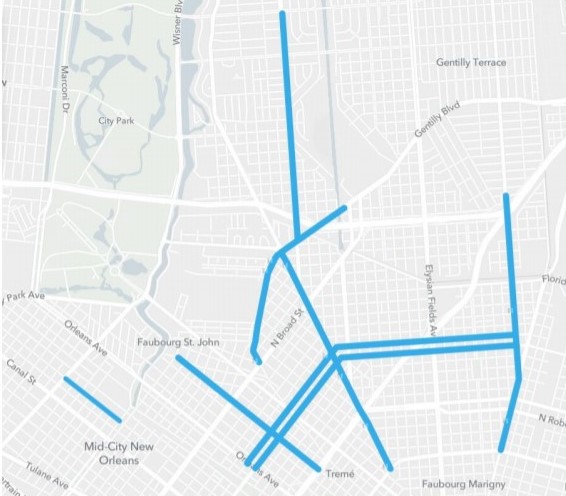 The 7th Ward and Downriver neighborhoods such as Faubourg St. John, St. Roch, Gentilly, and Mid-City are going to see miles of protected bike lanes and other street safety improvements such as extended curbs, improved signage, and roadway repairs.

Read more about the City’s proposed plans in our blog post by clicking here.

Officials from the City of New Orleans held a conceptual design meeting to present their proposed plans for street safety and accessibility improvements on Tuesday, November 17th 2019.

You can view the slides from the presentation by clicking here. 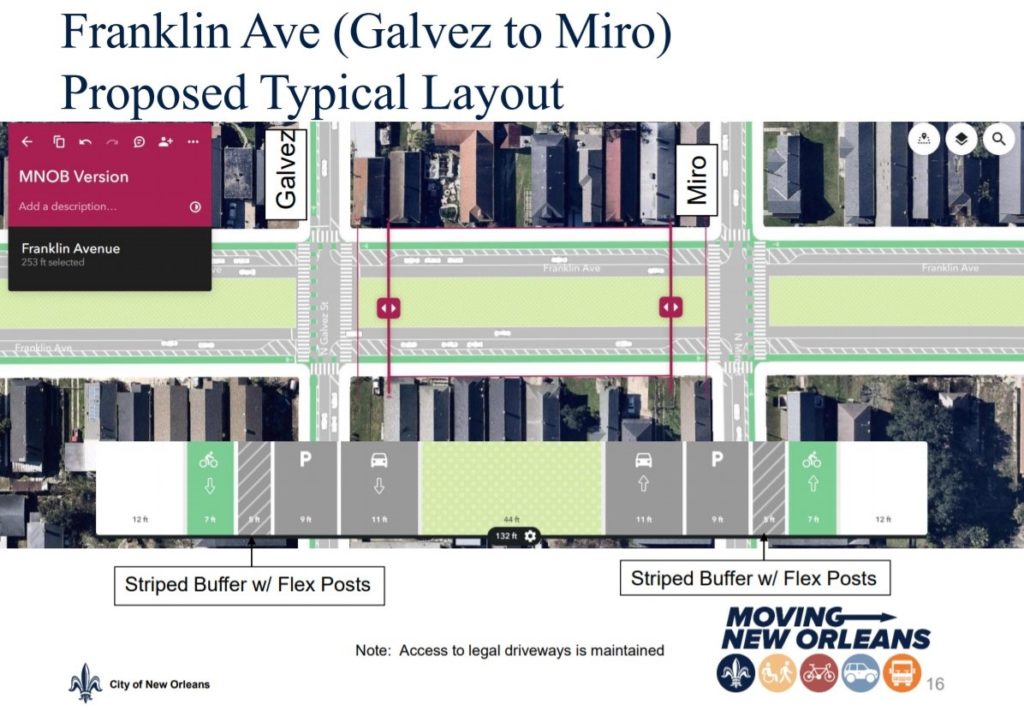 Here are the corridors that were discussed:

Starting in April 2019, the Office of Transportation embarked on a city-wide bike planning effort to create a completely connected and safer system of bike lanes that allows people on bikes to get to where they’re going safer and easier. The City held public meetings to gain input on the existing network and to hear what residents’ needed and wanted from their bikeway network.