A couple of weeks ago, the City released designs for protected bike lanes and other Complete Streets improvements in the Central Business District (CBD).

These improvements will allow everyone – people walking, biking, driving, and taking public transit – to move through the CBD with more safety and less stress, connecting neighborhoods across Uptown with downtown businesses (and vice versa).

We know these new protected bikeways in the CBD will benefit everyone, but a few, loud voices have pushed back on improvements like these in the past, and we can expect the same to happen this time. That’s why we’re asking our top supporters to let City officials know how much you would benefit from protected bikeways and Complete Streets in the CBD.

Will you tell City officials that you support protected bike lanes and complete streets in the CBD by signing on to our petition today? 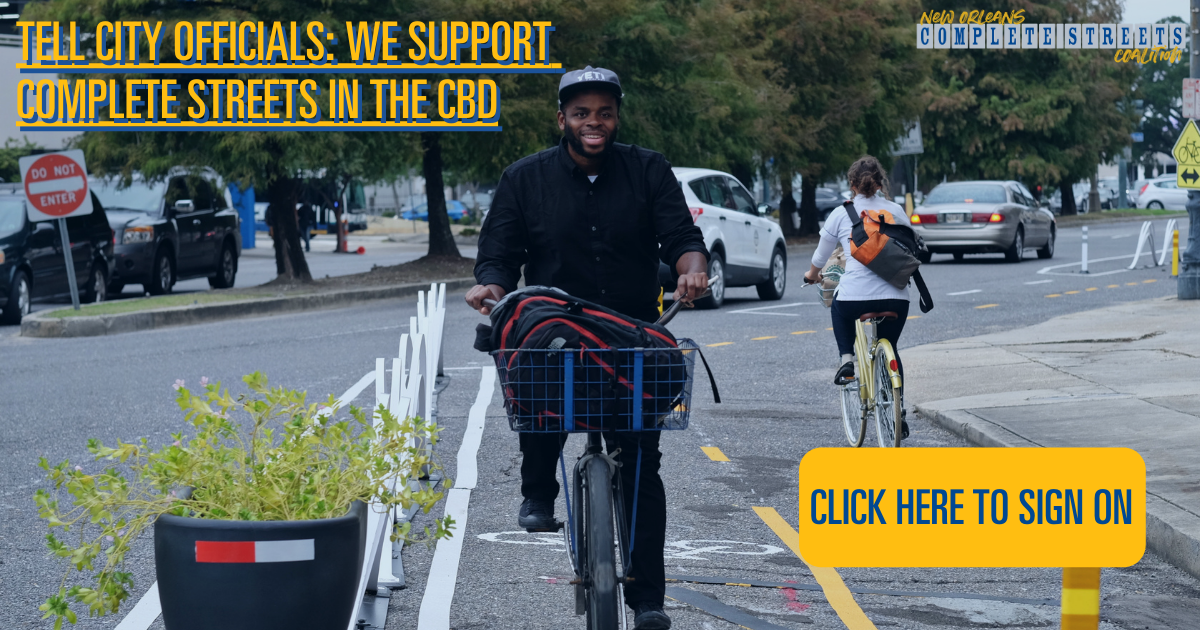 As construction on Moving New Orleans Bikes’ protected bikeways finishes up in Algiers, and gets started in the Marigny, the CBD is next in line, specifically on crucial connectors like Baronne Street and O’Keefe Avenue.

These streets are critically important for downtown residents, storefronts, and offices in the CBD. They are also crucial, every day connectors for New Orleanians traveling to their jobs, their favorite restaurants, to the French Quarter, and so many more destinations. The CBD is a central hub and a connector for the people and economy of New Orleans.

Unfortunately, between 2014 and 2018, over 800 crashes occurred on Baronne Street and O’Keefe Avenue alone. Many of these crashes, especially the ones involving people walking and biking, are preventable with proper street safety infrastructure.

Will you sign our petition telling City officials that you support complete streets and protected bike lanes on Baronne Street and O’Keefe Avenue in the CBD?

Thank you for taking action in support of Complete Streets in New Orleans. Things are moving fast so we’ll make sure to keep you updated.