Watching the official unveiling of this Complete Street renewed my hope and excitement for what’s to come. The ribbon wasn’t just cut on Elysian Fields, it was cut on a new era of more safety and less stress on New Orleans streets.

While this is a momentous occasion for our campaign, it’s not the end. In fact, it’s just the beginning. Now is the time we need to build community support for the many more Complete Streets coming to New Orleans. Elon, will you come to our next Movement Monthly on Tuesday, February 2nd at 6pm to keep building this movement? 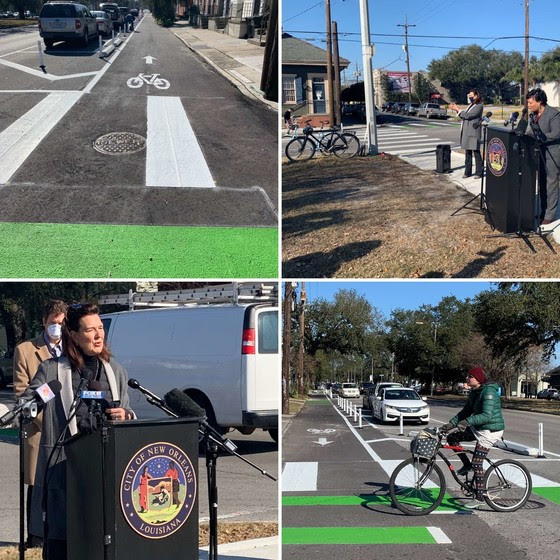 In addition to the ribbon-cutting, just the day before we presented an update on the Complete Streets campaign to the New Orleans City Council. Thanks to you, and the many other New Orleans residents advocating for more safety and less stress on our streets, the City Council was clearly impressed.

We presented the street improvements already built in Algiers and Elysian Fields, as well as the public support our campaign has amassed. According to a poll recently conducted, 87% of New Orleans residents believe the City should provide safe alternatives to driving for people to get to work, 73% support building protected bike lanes even if it means reducing one driving lane on some roads with multiple lanes, and 93% believe people deserve as many safe transportation options as possible to get to work on time.

We, the people of New Orleans, want more safety and less stress on our streets – we want Complete Streets!

As the City of New Orleans continues building Complete Streets, our city is also improving transit accessibility. This month, the City Council took the first step toward bringing back bike share in New Orleans. They approved the cooperative endeavor agreement with Blue Krewe, a new nonprofit that will manage New Orleans’ bike share system. In the next year, we should see these bikes rolling down Complete Streets, helping to ensure the benefits of more safety and less stress are equitably distributed.

We’ve come so far, and have many more accomplishments on the road ahead of us. If you’d like to be a part of our campaign and work to bring more safety and less stress to our streets, then click here to join our next Movement Monthly on Tuesday, February 2nd at 6pm.